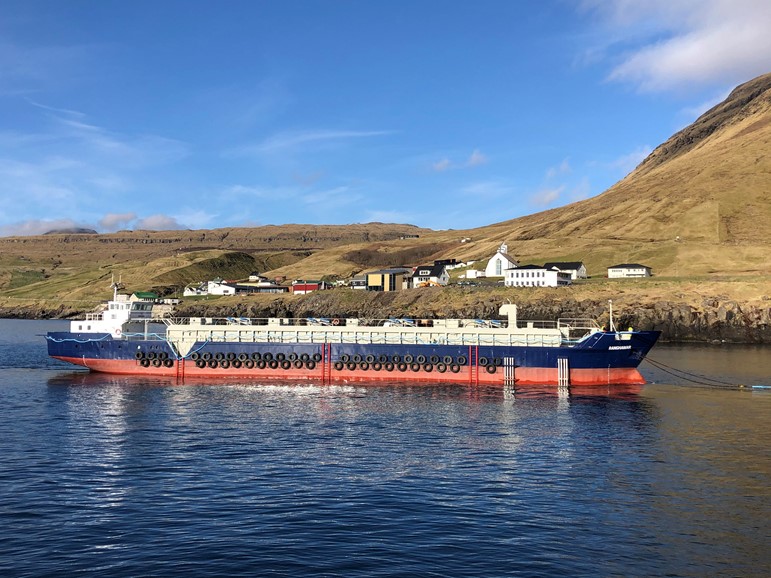 On April 21st , Bakkafrost’ s new feed barge arrived at the harbor in Norðragøta. The feed barge has been named Ranghamar. This is a big, modern feed barge, which will be anchored at the northern site at Gøtuvík, Eysturoy.

- With this new feed barge, we have got a modern ship, which has all the necessary equipment and technology. We now have two farming sites at Gøtuvík, and thus it is necessary to make investments in equipment, which meets the requirements that modern salmon farming sets.
The new feed barge is also very suitable for this area, as the weather at Gøtuvík can be a challenge, Oddvald Olsen, Farming Manager, says.

Ranghamar is 75 meters long and has a capacity of 700 tons of salmon feed and 5 tons of feed for lumpfish. It is equipped with an automatic feeding system, which can feed both salmon and lumpfish through the same feeding line. The system is remote controlled and has a camera system with surface cameras as well as underwater cameras, whereby the farmers can follow the feeding on their tv screens at the farming station.

Ranghamar is Bakkafrost’ s eighth feed barge of this type, and they have all done very well, Oddvald Olsen, Farming Manager, says.

- It was also at Gøtuvík, at the southern site, that our first feed barge of this type was anchored seven years ago, and it has done incredibly well. With this new feed barge, we have future-proofed our operations at Gøtuvík to overcome future challenges .

JT Electric has supplied all the technology aboard.